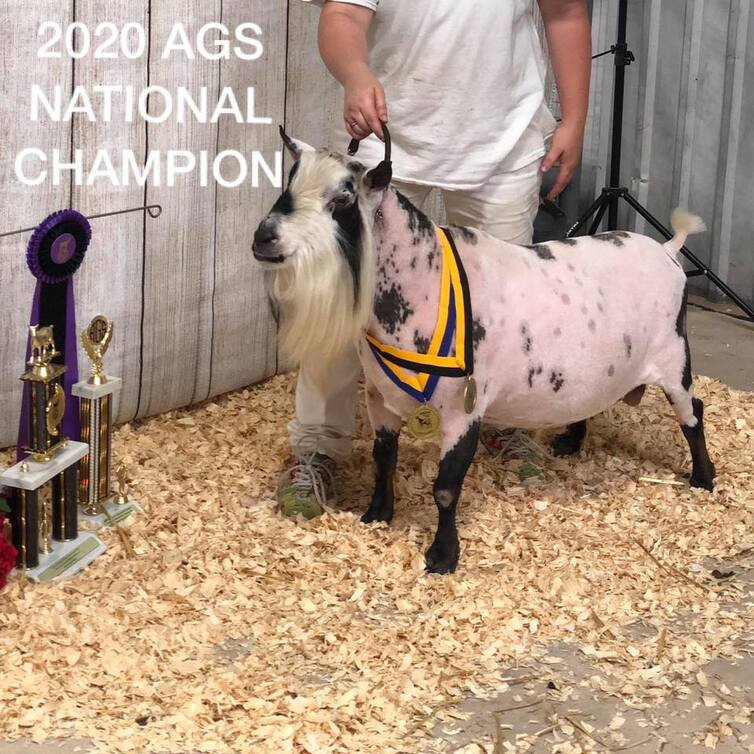 AS OF APRIL 2020- WE NOW HAVE 2 LAMANCHA DOES ADDED TO OUR NIGERIAN DWARF HERD :)

😍Parrish Farms took a small break from showing this year 2018 until recently and we attended the Mississippi Valley Fair. It is always a great show with many friends and awesome people. there we took Grand and Res Grand Sr doe, as well as Grand and Res Grand jr doe, then on to win Best JR doe in Show with Parrish Farms LEG DeeDee- jr kid on 8/4/18.

:) Labor day weekend Pappy and Lucifer both did really well at the Sedalia buck show
​
😊😊Then we attended the Caledonia Minnesota show 9/15/18. we really were so blessed to have won and placed with all our does for all cuts in all classes in all 4 rings, against some amazing nigerians. PARRISH FARMS SP PEEPS-LATTE won Grand Champion Jr doe under Todd Biddle, and she also won Res Grand Champion jr doe under Jay Rudolph. PARRISH FARMS OR CHIPS AHOY won Res Grand Champion Jr doe under Tom Considine. BUT our biggest thrill was, PARRISH FARMS PC PUMA winning GrandChampion Jr doe and Best Jr Doe in Show, under Erin Griner!! these were huge wins for us as the competition is amazing in MN. we are blessed to have these winners and placings

WE ARE ONLY RAISING NIGERIAN DWARFS NOW AS OF DECEMBER 2016

We will be starting 305-day DHIR testing with ADGA and AGS this year in 2013.
We will be doing DHIR again in 2014 with ADGA and AGS
In 2015, we will be doing DHIR Standard testing again with ADGA and AGS as well as LA and we are signed up for ADGA Plus!!
In 2015, all does besides one earned their milk star with AGS and all but 2 with ADGA for our FF does
In 2016, we are on our second year of ADGA Plus, ended up getting all Nigerian Bucks DNA tested and 2 Nubian Bucks DNA tested along with G6S on them, DHIA for our 4th year, and LA for our first year.
In 2017, we are once again an ADGA PLUS member, DHIA 5th Year, will be doing DNA testing on all bucks that reside here this summer still that haven't been tested, LA will be our 2nd year

*2018, We will be doing DHI and LA if they can fit us in. possibly showing only a couple shows this year.

We are super proud and excited about our many accomplishments that we have made in just the 9 years of raising Nigerian Dwarfs.

We are now accepting reservations on kids for fall/winter 2020

Please see the Nigerian Breeding schedules for putting down your deposits on kids from the breedings. Deposits can be made by Cash or PayPal only, payment in full in cash or paypal only. Please also see the Sales Policy Page before making a purchase. There is information about where to send the paypal payment and deposits as well on there.
Parrish Farms is based out of the rural town/village of Oquawka, Illinois. We have been raising goats since January 2009 and registered stock since 2010. The farm consists of Registered Show, Milk, and Breeding Quality Nigerian Dwarf Dairy Goats  (ADGA & AGS), our Lab/Pyr Cross Pup (Villa), and 4 outdoor cats (Tasha, Beijing, moonie, blackie) and 1 inside kitten (Baye- Jayedynn's kitty), we lost our English Mastiff Rocko and Rosco our cat this spring, RIP our big boy and one of my favorite cats of all time.  The owners of Parrish Farms are Jennifer & Jayedynn Parrish. Jennifer graduated from Iowa State University in May 2008 with a B.S. in Animal Science and a B.S. in Dairy Science and is the one who runs, owns, and manages the farm. Jennifer is also a Nutritionist specializing in goat nutrition with her own lines of goat feeds. Jennifer also works with dairy and beef cattle nutrition, PNP Nutrition.


***At Parrish Farms we strive for excellent health/nutrition of our stock with healthy coats, good kiddings, fast cleanings, vibrant kids at birth, and fast growing and healthy kids. The goal for Parrish Farms is to hand select genetically and/or phenotypically superior animals for our herd. Herd sires are selected with an animal mating system in mind to make the next generation as improved as possible. Parrish Farms emphasizes structural correctness, maternal traits, balance, and superior pedigrees.

CHAMPIONS AND AWARDS GIVEN TO OUR STOCK!!


ARMCH/CH VIKING'S BATMAN RETURNS +S- Batman is now AR in AGS having 3 AR daughter who earned their milk stars and their AR, I am so happy all my hard work is finally paying off, so wish i still had this boy here, i miss him every day!!

June 2013 - Viking's Batman Returns picked up his 1st ADGA & AGS leg at LadySmith Show in WI with Josh Kaplewski as the judge and 1 Res Grand with Jay Rudolph.

May 2013 - Olson Acres SS King Arthur picked up his 1st ADGA leg in Wisconsin, with Tom Considine as the judge

Proud to be the owner/home of PGCH Olson Acres SS King Arthur 88.8 VG+

The Goat Herder's Prayer
This night, the feedin' all now done, I bow my head in Prayer,
And Thank  you, God, with my whole heart, for always being there.
I remember this morning, as the sun first broke, when I called in the herd,
How precious it was to hear YOUR voice ...
like my goats listening for MY word.
They ran from scattered all about, excited just to see me,
Me standing there beside the barn with buckets of feed.
I know they place their trust in me, to meet their needs and care.
This 'ol barn would be an empty shell were I not waiting for them there.
Ain't that how it is with us, God?  Like between them goats and me?
Life's journey would be so empty, IF YOU weren't there with me.
So I thank You, Lord, for every goat that you've placed in my care,
And for every lesson that I've learned in this journey that we share.
For the miracle of life ... and ... of sacrifice that some are called to serve
For we are all your creatures ... together here,
And You ... The Master Shepherd.
(Anonymous)